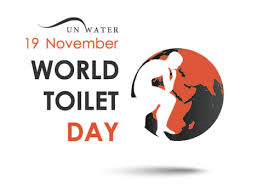 A day set aside for toilets?  Why not – particularly when it helps to highlight the lack of sanitation in some parts of the world, and the link that it has to girls not being able to continue their education, along with the more obvious issues, such as illness and disease.

It is estimated that 2.5 billion people (that’s nearly 40%of the world’s population) live without proper sanitation. More than 1.1 billion people have no sanitation facilities at all. Instead of using a toilet, they defecate in fields, forests and other open spaces. Others resort to buckets or plastic bags that get thrown in ditches, along the roads or in bodies of water.

While having a toilet is important for everyone, access to safe, clean toilets brings particular benefits to women and girls. Sexual harassment and rape are a risk for many women who wait until nightfall and seek the privacy of darkness to relieve themselves. Freed from the need to defecate in the open, they no longer have to suffer the indignity of physical and verbal abuse or humiliation. Women and girls don’t need toilet facilities just for defecation; they also need privacy and dignity when menstruating. Menstruation, pregnancy and the post-natal period become more problematic if women have nowhere to adequately take care of themselves. Separate toilets at school mean more girls are likely to attend in the first place, and more girls are likely to stay on after puberty to complete their education. Women place a higher value on access to private sanitation facilities than men but often remain unheard.

I, for one, won’t be complaining so much the next time I have to use a not-so-clean public toilet.

We sourced our information from the United Nations Website.

This is an article from our Toilet Series.

Posted in Blocked Drain Series, Toilet Series
← What is a thermocouple?Safety bollards for your gas meter →