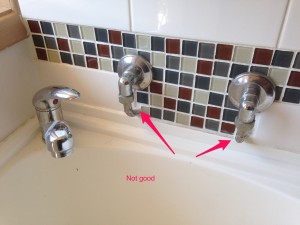 Do it yourself tap disaster. What not to do with your taps!

We recently came across this ‘Do It Yourself Tap Disaster’

This person has used flexi hoses in a wall cavity to operate a laundry flick mixer tap.  Even though everything looks very neat and the person thinks they’ve saved themselves some money by doing the work themselves, if the hoses burst in the wall cavity, there will potentially be major issues with water damage……and because the work hasn’t been done to comply with Australian Standards and the relevant Plumbing Codes, insurance would more than likely be null and void.

Sometimes ‘fixing’ your own taps just ain’t worth it!

This is an article from our Taps Series