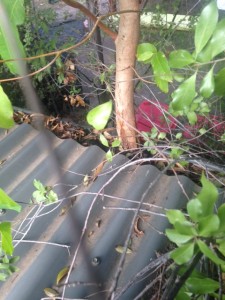 We were recently called out for a roof leak at a property our customer had just purchased.  Among a long list of other things, he’d also noticed some wet patches on his ceiling and thought he might have some major works to be done.

It didn’t take us long to work out the roof leak issue – his new house had come complete with its very own miniature forest!  There were well-established plants growing along two sides of his guttering!  These plants had been growing in there for years and had now totally blocked the gutters, so when there was any rain, the water had nowhere to run, except inside his roof and through to his ceiling.

Give us a call if you need your miniature forests cleared.  We’d be happy to help.

This is an article from our Guttering Series